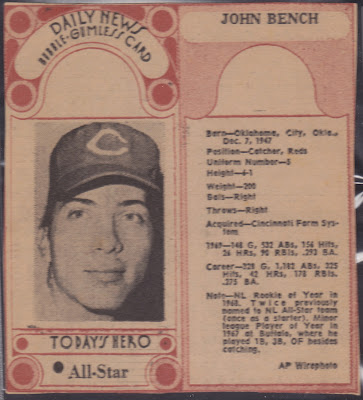 I suppose it's all relative, but I've always felt that collectors of Cincinnati Reds cards and memorabilia had more than their share of regional collectibles in the post-war era. From the Harry Hartman team issues of 1939-1940 to the Kahn's hot dogs issues from 1955 through the Sixties, to Burger Beer photos, to team-issued postcard sets most years since the mid-Fifties. (I know, I know . . . we Milwaukee Braves collectors had a pretty nice selection of regionals through the 1950s. As I said, it's all relative).
I'm sure that wealth of goodies is what inspires what seems to be an extraordinary number of very dedicated, very competitive collectors. Fortunately for us, most of the these collectors are extremely generous in sharing their discoveries and their knowledge with the rest of the hobby.
One such collector, Patrick Smith, recently forwarded information about a couple of Reds items that are worth adding to the Standard Catalog.
The first is a pair of variations of the 1970 "Bubble-gumless Cards" issued as newspaper cutouts by the Dayton Daily News. This is one of the largest of that eras's newspaper "card" sets, at least among sets that were baseball-only.
For many years the checklist for that set stood at 160 players from what looks to be all major league teams in both leagues. The pictures were printed in black-and-white in a size of about 3-1/2" x 4".
Smith has sent scans of two previously uncataloged paper cards that have to be considered variations of the basic set. They are All-Star cards of Tony Perez and Johnny Bench, the two Reds that had been selected to the N.L. squad in fan balloting. The All-Star versions are very similar to the regular cards except that they are printed with red background decor to complement the black type and b/w photo. Instead of a card number in the panel below the picture, there is the designation "All-Star".
The existence of these two special cards leads a cataloger to wonder if that was the extent of the All-Star series. The 1970 All-Star Game was played at Riverfront Stadium on July 14. The Nationals won their eighth consecutive A-S contest and the game is famous for Pete Rose's slide into home plate that broke the left shoulder of Indians catcher Ray Fosse.
Smith is unsure of when the All-Star cards were printed in the Dayton paper. They might have been printed when the team rosters were announced, or they might have been printed on July 14.
Were the other A-S starters included in the series? Were the other Reds who were chosen for the team (Pete Rose and pitchers Jim Merritt and Wayne Simpson)?
Let us know if you can shed any light. Tomorrow we'll present Smith's other Reds "find."
Posted by Bob Lemke at 9:08 AM