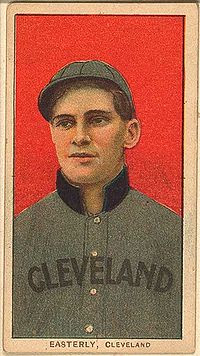 Ted Easterly appeared only in the 1909 Obak set, but by then he was in the major leagues. He had been born in 1885 in Lincoln, Neb.
A note in my files indicates he had played with Charleston of the Class D Eastern Illinois League in 1907, from whom he was purchased by Los Angeles of the Pacific Coast League, at the age of 22. Presumably that was late in the season, as he played in only 11 games that year, as a catcher. No stats are available for the EIL.
Easterly was the Angel's full-time backstop in 1908, and hit .309. He was drafted after the season by the Cleveland Naps. Easterly played for Cleveland from 1909-1912, both catching and in the outfield, batting .297. In August of 1912, he was purchased by the White Sox, playing with them through the 1913 season, when his batting dropped off to .237. With Chicago he led the American League with 13 pinch-hits in 1912.
When the Federal League was formed as the third major league in 1914, Easterly jumped to the K.C. Packers, and hit for a .336 average. When the Federal League folded after the 1915 season, the 30-year-old Easterly was unable to catch on with another major league team and he returned to the Pacific Coast League in 1916 with Salt Lake City and Los Angeles, but played only 33 games. He appeared in only two games in 1917, with L.A. In 1918 he joined Sacramento, also in the PCL, as a back-up catcher, hitting .259.
Easterly was out of Organized Baseball in 1919, but reappeared in the Texas League in 1920, where he batted .310 for Beaumont into July, when he was released, "for the good of the game." It was his last professional engagement.
Somewhere in my files I have a folder with notes on Easterly that indicate he was involved in some sort of funny business, probably gambling. Someday I'll probably work up a more thorough presentation, but that would be beyond the scope of this Tales of T212 series.
Easterly died July 6, 1951 (just five days before I was born) in Clearlake Heights, Calif.
Posted by Bob Lemke at 9:59 AM