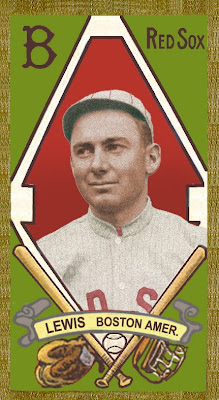 As I've mentioned earlier, I'm in the process of creating a second T202-style "Triplefolder" custom card.

This one will feature the Boston Red Sox.

As part of the process, I've created T205 "Gold Borders" for Duffy Lewis and Harry Hooper. If such cards had actually been created in 1911, they would have been the "rookie cards" for the pair.

As you may know, when Hassan cigarettes created the T202 Triplefolders in 1912, most of the player panels that flanked the black-and-white "action" 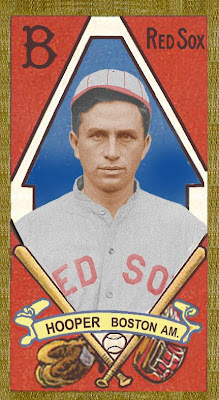 photo at center were close-up versions of the previous year's T205s. Unlike most of my custom card creations, I won't be producing T205 backs for these two cards, or actually printing them as singles. But since I needed them for the end panels of my Red Sox T202, I thought it was worthwhile to "complete" the fronts.

Keep watching this space for the completed T202 Red Sox card.
Posted by Bob Lemke at 7:58 AM