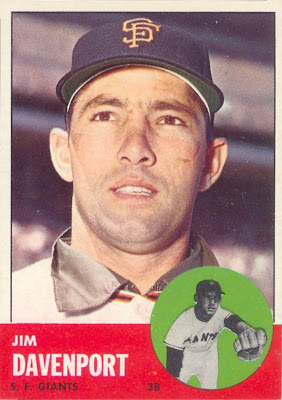 It looks as if, after nearly 47 years, we have a new variation to list for the 1963 Topps set, brought to our attention by collector Tony Gordon.

Card No. 388, Jim Davenport, can be found with photo cropping differences on both the large color portrait photo and the black-and-white inset action pose.

Some cards are found on which the shadow of the jacket collar touches the red box at bottom. On other cards, the shadow is significantly above the red box.

On the shadow-touches-box cards, the glove in the inset photo touches the edge of the green background circle and there is a larger area of Davenport's right wrist visible beneath his dark sleeve. On the shadow-above-box cards, the glove is well inside the green circle and there is only a sliver of skin showing on the right wrist.

Without seeing an original press sheet for verification, it is my theory that the variations occurred because Davenport's card was in the double-print row that was common with Topps cards in the 1960s. If that's the case, there are 10 other double-printed cards from that row that may or may not show similar cropping variations.

A check of '63T Davenport cards being offered on eBay recently does not indicate that either variation is significantly scarcer than the other. 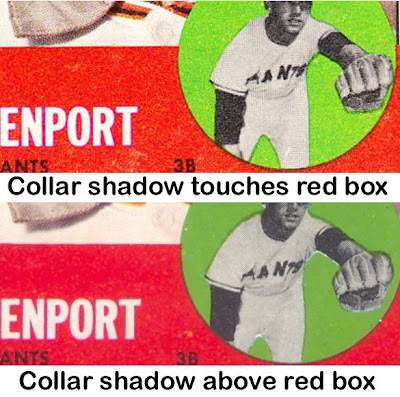