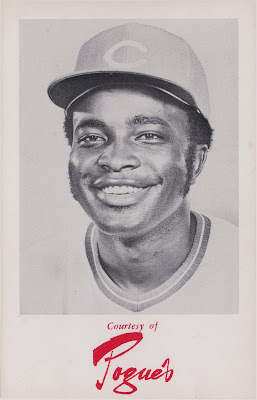 What we have here is a photocard along the lines of other contemporary issues that appear to have been produced in conjunction with autograph appearances by Reds players at area stores.
It is 3-1/2" x 5-1/2" with a semi-glossy surface and blank back.

In this case, Smith speculates we're looking at a 1973 issue, as the photo of Joe Morgan on this card is identical to that on the team-issued postcard of that year.

For those not familiar with Cincinnati's retail scene, Pogue's was founded in 1863 and was a typical big city downtown department store, famed for its elaborate Christmas displays. It was merged with L.S. Ayres in 1983.

We'll list this Pogue's card in the next (2011) Standard Catalog. Perhaps in time other players in the series will turn up.
Posted by Bob Lemke at 9:33 AM