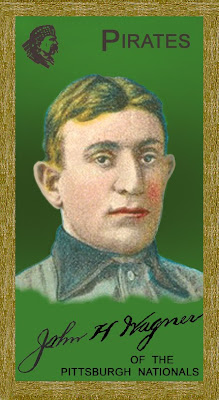 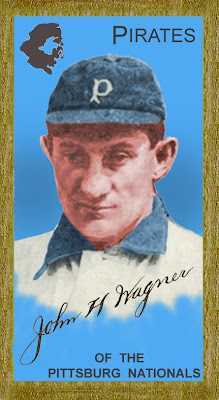 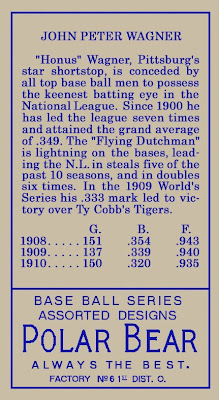 I've been expanding my repertoire of custom card creations. In recent weeks I've been working on replicating the classic 1911 T205 Gold Borders with a Honus Wagner card "that never was."


Because he said he didn't want children buying cigarettes in an attempt to get a card with his picture, Wagner refused to cede the rights to issue a card of him to the cigarette companies during the heyday of the tobacco-card era circa 1909-1919. That's what makes his T206 card the "King" of baseball cards and worth six figures in even the most deplorable condition.


It was therefore quite natural that I chose "The Flying Dutchman" as the subject for my first T205 project. I'm still fine tuning the images, but shown above are the back and two possible fronts I'm considering when I finally get the cards into print.


The green-background card uses a portrait identical to the famed T206 Wagner, but has more of an artwork look as the result of its having been used on a contemporary Am 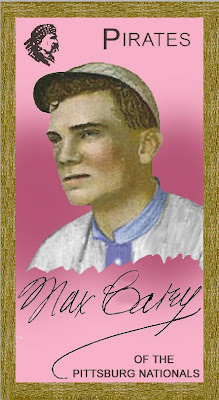 erican Caramel Co. issue. The blue-background card uses a portrait that originally appeared on a pin-back celluloid button.
At right is the semi-final version of a T205 Max Carey "rookie card." Actually, Carey's real rookie card came in 1912, in the T207 Brown Background set, but he could have appeared in T205 if the tobacco/card magnates had recognized the future Hall of Famer's potential earlier.
The portrait on my T205 is a "flopped" version of that which appeared on his T207.
I haven't produced a back for my T205 Carey, and I may never do so, because the fact is that both of these T205s are just stepping stones to a more ambitious project I've got underway.
I'm currently at work on a pair of 1911 T202 Triplefolders. Like the original T202s, the end panels of my cards will be adaptations of the players' T205s. I've got a great action photo of Honus Wagner to use as the card's center panel, and have completed the back write-ups in a style that I'm confident pays proper tribute to those unsung writers who did the work on the original T205s and T202s.
Kepp your eye on this space in coming days for the debut of my T202 custom card, titled "Wagner Safe at Third."
Posted by Bob Lemke at 6:17 PM