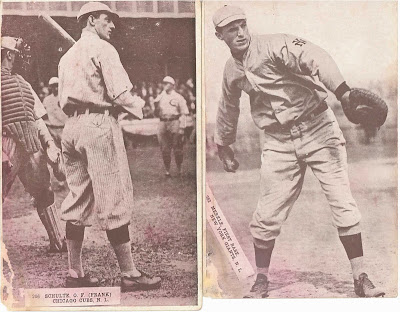 Thanks to a question from a reader, we have made a pair of additions to the blank-back checklist of the 1913-1915 Pinkerton Score/Photo/Post Cards checklists. They are card #252 shown at right, Fred Merkle, and #205 Heinie Zimmerman, not shown. Both Merkle and Zimmerman had previously been cataloged among the scorecard-back Pinkertons, but had not been seen as blank- or postcard backs.

These approximately 3-1/2" x 5-1/2" cards take their name from the fact that they are printed versions of some of the photographs that appear as the central portions of the 1911 T5 Pinkerton cabinets. It's unknown whether these latter-day cardboard versions have any connection to the "real" Pinkertons, and the checklist for this type is considerably shorter, with fewer than two dozen known players, compared to more than 300 known T5 cabinets.

These cards can be found with score cards printed on back, with postcard backs, or with blank backs. The score card versions are considerably scarcer than the others, and valued at about 2X.