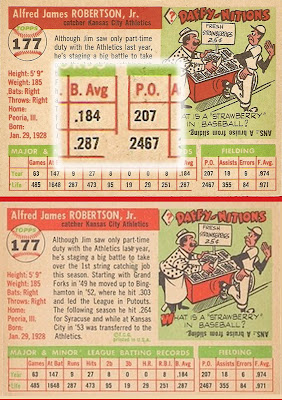 I'm still working through my holiday vacation backlog and I came upon a report from Cliff Bowman about an heretofore uncataloged variation among the 1955 Topps high numbers.
Bowman sent a scan of the back card #177, Jim Robertson, on which the red lines that complete the stat boxes for lifetime batting average and putouts are incomplete.
I checked the various '55T Robertsons for sale on eBay, and ALL of the cards that had back images available were like this (incomplete boxes).
When I posted an inquiry on the post-war section of the Net 54 baseball card forum, however, I was surprised to find the several of those who responded were able to provide scans of Robertson cards with complete boxes in that area.
I'm not sure which version was printed first, and so far the relative numbers of the two variations seem about equal, so that initially there doesn't seem to be any value differential warranted.
Back on Sept. 20 we published a similar discovery concerning the 1956 Topps Willard Schmidt card. Two days later we had an update that showed the Schmidt card was really a progressive problem that occured during the course of printing, rather than a pre-press variation. For that reason we decided not to list it as a variation in the Standard Catalog of Baseball Cards.
That makes it hard to specify why I'm leaning towards listing this card as a variation. If, after publication of this report, and a suitable time for reader response, we don't hear of any "transitional" variations between the "full boxes" and "partial boxes" versions. You'll likely see this listed in the 2011 edition.